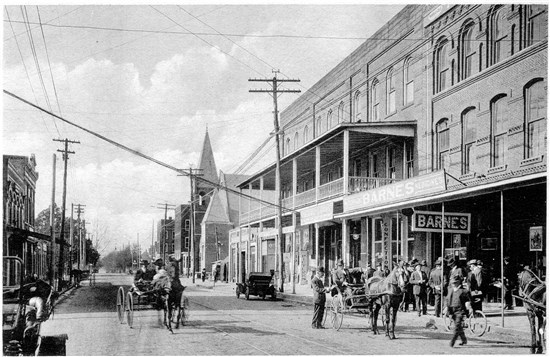 Valdosta/Lowndes County has always been a popular gathering place. Beginning with the Creek and Seminole Indians, the Spanish missionaries and the American pioneers, the fertile and beautiful land of this area has enticed people to make their homes here.

Lowndes County was established in 1825. Its first county seat, Franklinville, was established in 1828. In 1837, the City of Troupville became the county seat. When the Gulf and Atlantic Railroad decided to put a right-of-way four miles south of Troupville, the citizens of Troupville made an interesting move to ensure the future prosperity of their town—they picked it up and moved it four miles. The town was then renamed Valdosta, in honor of "Val d'Aosta," the plantation home of former Governor George Troup. In 1860, Valdosta was incorporated as the new county government seat.

Valdosta's history has been closely tied to the soil. The sandy loam allowed the city to become the inland capital for Sea Island cotton. When cotton crops were devastated by the boll weevil in the early 1900s, other crops such as pecans, peanuts and tobacco rose in popularity.

Valdosta's business district experienced tremendous growth from 1890 to the late 1920s, and most of the city's historic public buildings were constructed around this time. The Valdosta Heritage Foundation is dedicated to saving and restoring the remaining historic buildings, homes and districts of the city. The Foundation is particularly proud of its efforts throughout 2016 to restore the Wisenbaker-Roberts House, Valdosta's oldest known house located in the Fairview National Register Historic District.

Valdosta has six Historic Districts and two individual listings on the National Register of Historic Places. The six districts are as follows: Valdosta Commercial Historic District, Fairview, North Patterson, Brookwood North, Southside and East End. In addition to these districts, Valdosta City Hall, Sunset Hill Cemetery, the Lowndes County Courthouse, the Carnegie Library and the Crescent are also listed on the National Register of Historic Places.

The determination of the little town that moved to the railroad is still evident today in the city that is moving into a prosperous future. Agriculture continues to be a driving force. Pine trees, now the area's most important raw material, are grown and harvested for a variety of uses. Furthermore, the city's location and success keeps attracting more business and industry, including a growing number of nationally-known brands. All of this and a remarkable quality of life combine to make Valdosta "South Georgia's Regional City." 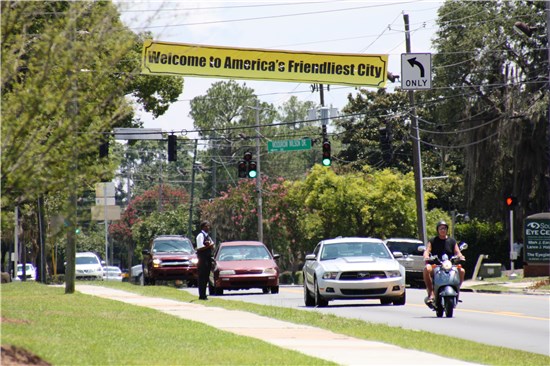 aldosta is a network of neighbors created by the many diverse members of the community – each celebrated and valued individually and collectively. Whether you are a long-time resident, a newcomer to the community or just passing through, you are a vital part of this community.

To see and learn more about Valdosta's history, brochures with city walking tours are provided by the Valdosta-Lowndes County Conference Center and Tourism Authority.

Tours of many of the city's historic homes—such as the Crescent (the current headquarters for the Valdosta Garden Center) and the Barber Pittman House (former home to the first bottler of Coca-Cola outside of Atlanta, which now houses the Valdosta-Lowndes County Chamber of Commerce) are also available. Contact the Crescent at 229-244-6747 or the Chamber of Commerce at 229-247-8100 to arrange tours.

The stately appearance of the downtown streets and storefronts has earned Valdosta repeat National Main Street Certifications and awards from the Georgia Downtown Association. Home to over 120 restaurants, shops, government agencies, and churches, Valdosta Main Street is alive with active residents and businesses of the city. Residents and guests are encouraged to tour beautiful Downtown Valdosta, or call 229-259-3577 for more information.

Located in the old Carnegie Public Library, the Lowndes County Historical Society and Museum is another treasure of information. The museum collects and maintains research materials and interesting displays. Contact the museum at 229-247-4780.