The Investigative Bureau, located on the second floor of the police headquarters, is manned by 29 dedicated men and women assigned as detectives and civilian employees in seven areas of expertise. These areas consist of the Person's Crimes Unit, Property Unit, Burglary Unit, Narcotics Unit, Gang Unit, FBI Joint Terrorism Taskforce, Property/Evidence Section, and the Administrative Function.

The overall goal of the Investigative Bureau is to provide premiere investigative services to the citizens of Valdosta by maintaining a clearance rate for all FBI Part 1 Crimes at or above the national average. The bureau follows all investigative leads until the case is cleared or until all leads have been exhausted.

Investigates homicides, rapes, all facets of robberies, aggravated assaults, batteries, and any crime committed against a person which requires follow-up investigations.

Investigates crimes involving the use and/or possession of illegal drugs and other substances. In addition, the Narcotics Unit investigates issues involving vice and organized crimes such as prostitution, pandering, pimping, and gambling.

The unit is part of a Federal Gang Taskforce headed by the Federal Bureau of Investigations (FBI) and is responsible for the investigation of cases involving gang related activities and events.

One detective is assigned to the Federal Bureau of Investigations (FBI) Joint Terrorism Taskforce. The detective's responsibilities include working with the FBI in identifying any terrorism activities an events.

This section consists of two civilians who are responsible for receiving, safeguarding, and maintaining chain of custody of all property and evidence received by the entire police department.

This aspect of the bureau consists of the Bureau Commander, Lieutenant, and one civilian secretary. 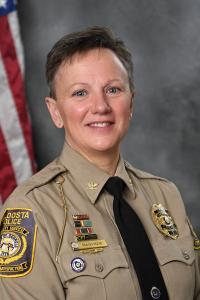