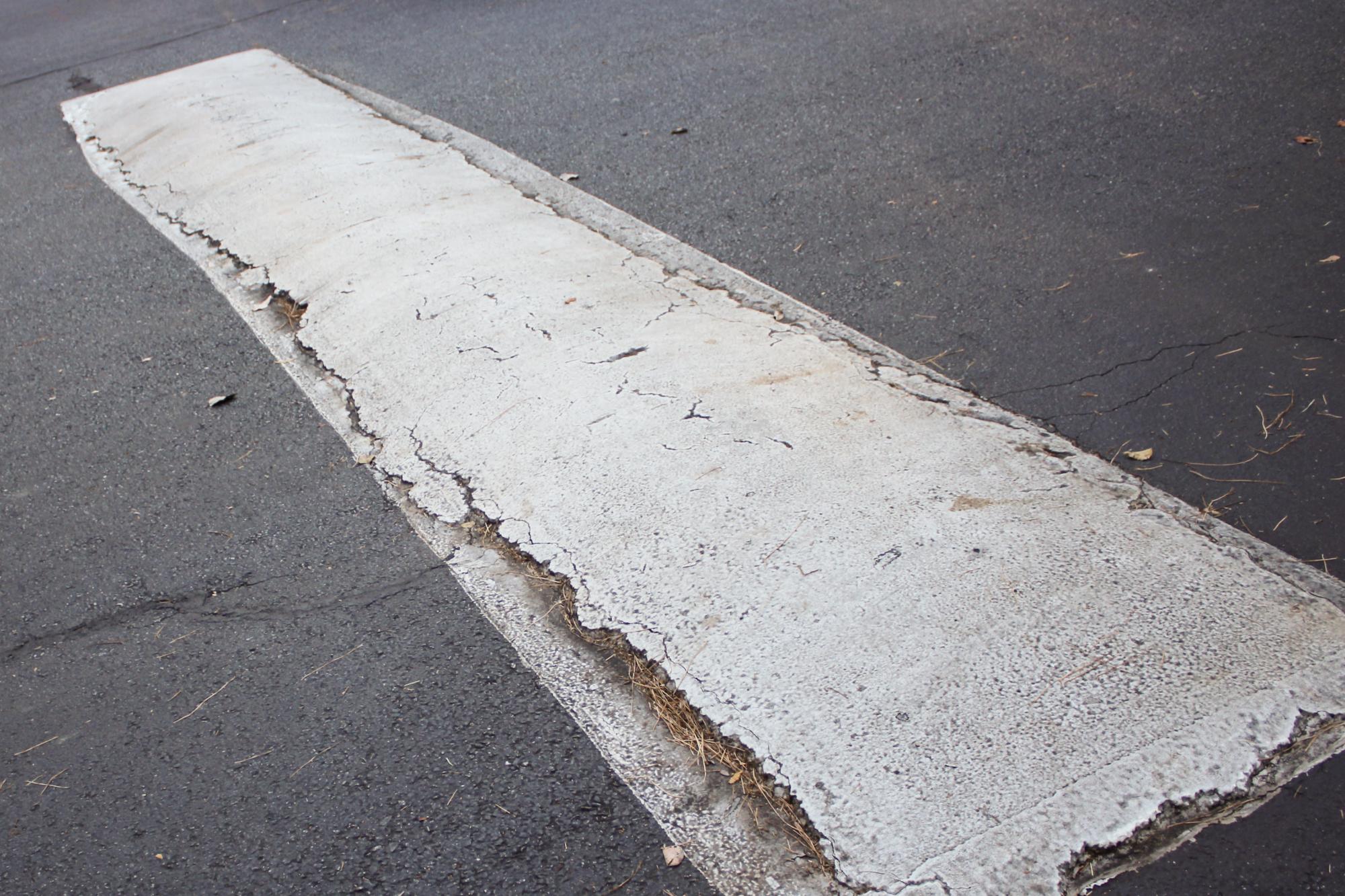 The Traffic and Street Maintenance Division for the City of Valdosta conducts nearly two hundred speed studies every year to determine if roadways need speed bumps. However, few of these studies come back indicating a speeding issue. Traffic Manager Larry Ogden says that when residents find out their road does not meet the requirements, they are often in disbelief. He explains the speed study process, criteria, and even the city's switch from using asphalt humps to rubber bumps.

Many residents are familiar with the typical asphalt humps that are used as speeding deterrents. A speed hump is anywhere from six to twelve inches in width and rises to three to four inches in height. They are smooth and designed to create a gradual stop. However, many may not realize that these humps often may be a very costly option and can be damaging to the road underneath them. The installation costs alone average out to $5,000 per hump. Over the years, speed humps can become cracked or chipped, and some will even mash down into the asphalt, which the city then has to pay to repair. Another cost to consider is removal costs. If the city is requested to install speed humps and the residents later change their minds, they would then be charged for that removal process.

To help alleviate the high cost and efficiency concern, the Traffic and Street Maintenance Division decided to switch over to rubber speed bumps instead. A speed bump is usually twelve inches in length and rises about three and a half to four inches. Speed bumps are more adjure to get people to slow down and cross with more caution. They are installed using asphalt spikes and concrete bolts. Altogether, this process costs about $140 per bump. They are designed to handle up to 40,000-pound vehicles so they can withstand delivery trucks. However, it is also important to note that they are only placed on local and residential roads. All major routes are not considered for speed bumps as these heavily traveled roads would cause too much damage, and it would require constant maintenance. The funding for speed these bumps comes out of the Traffic Division's annual budget and the SPLOST VII & SPLOST VIII funding. Specifically, the installation and repair costs would be covered by the signs and markers budget. 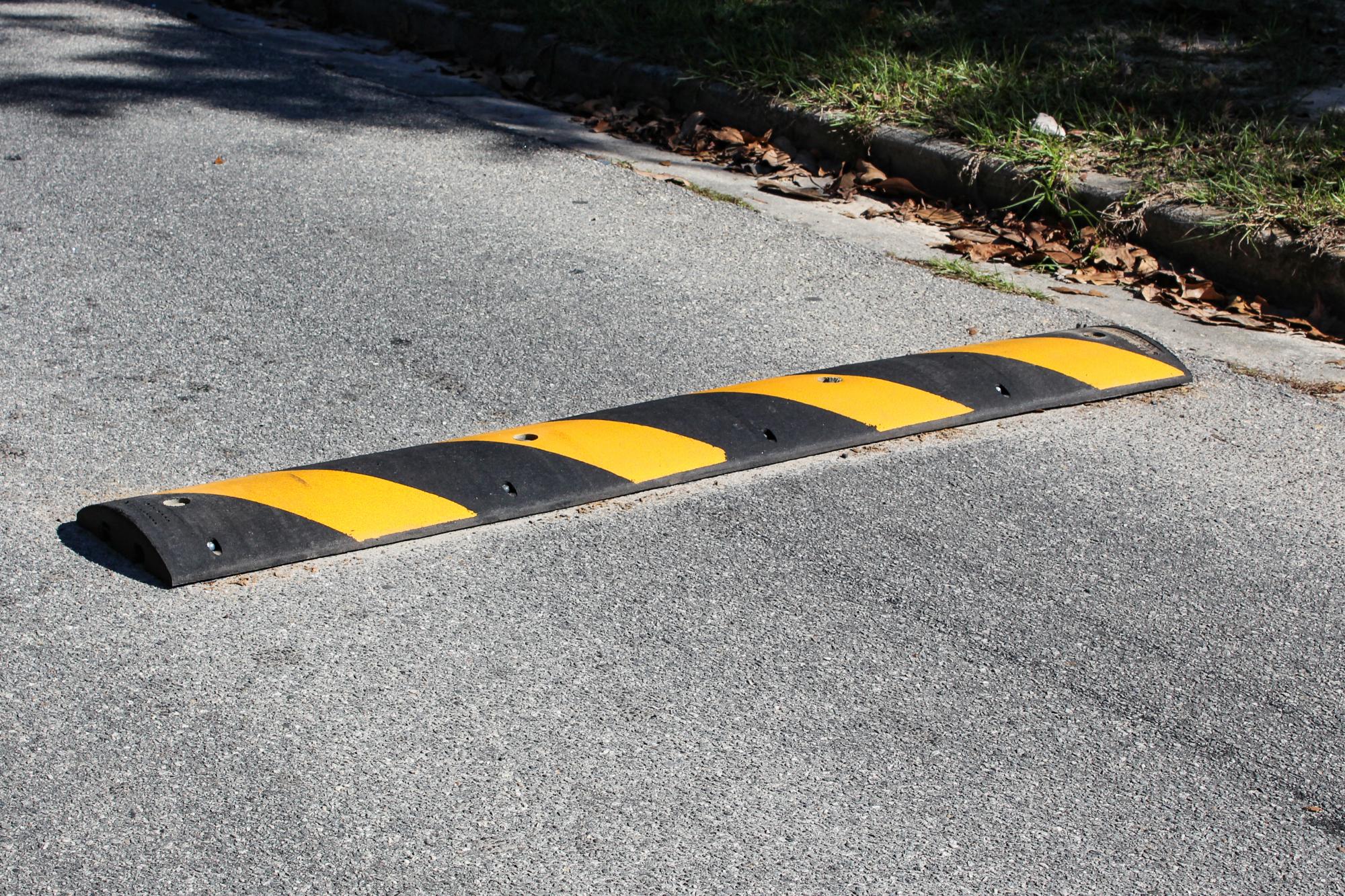 The current city policy on speed bumps has been in place since September 14, 2010. It states that a street or neighborhood has to have a speeding issue of 10 MPH over the posted speed limit for it to be considered a speeding problem and necessary of speed bumps. It has to fall within that 85 percentiles. If 85% of the vehicles in that area are going at least 10 MPH over the speed limit, that would mean that they qualify for speed bumps.

The process to get speed bumps on your roadway begins with calling or emailing the Traffic Division to request a speed study be conducted in your neighborhood. Once the request is received, the Traffic Division will reach out to the citizen to acquire more detailed information such as street names, the day the resident would like the study to be conducted, and the length of time. The speed test is typically performed for a full 24 hour period during a weekday unless the resident explicitly requests otherwise.

Residents can request the count be done on the weekend and up to a 48 or 72-hour period. However, Traffic Manager Larry Ogden says that the day or duration has little effect on the study's outcome in his experience. He says, "My experience has shown me that if I do a weekend count, the numbers are going to be the same as a weekday count. I have seen the same results with a 48-hour count versus a 72-hour count. Basically, all these numbers are consistent across the board regardless of how long the study is conducted and on which days." After the details are confirmed, a team will then go out to place and program the machine that conducts the study.

This machine is known as the Metro Traffic Counter. It is a rectangular box that has two black tubes extending from the box. The counts are either done one of two ways. If there is one tube, it is counting the number of vehicles that go down the street. These measurements are taken with puffs of air. Every two puffs of air it receives are registered as one car, so the front tires and the back tires cross over the black tubbing, releasing these puffs of air. If you have a pick-up truck carrying a trailer, that would be counted as two vehicles. Still, when they run two tubes across the road, the program will recognize that the axle width is not correct for two vehicles, and it will be counted as a vehicle pulling a trailer or one vehicle altogether. All of this information can be programmed to be separated or included in the final study results, which is why Ogden prefers to use this counting system. The program allows Ogden to filter out what type of vehicle went by, what time, and what speed. "We can determine how many buses went through a specific street. I can filter out just about anything from buses to bicycles and semi-trucks with this program. It is set to record everything," said Ogden. 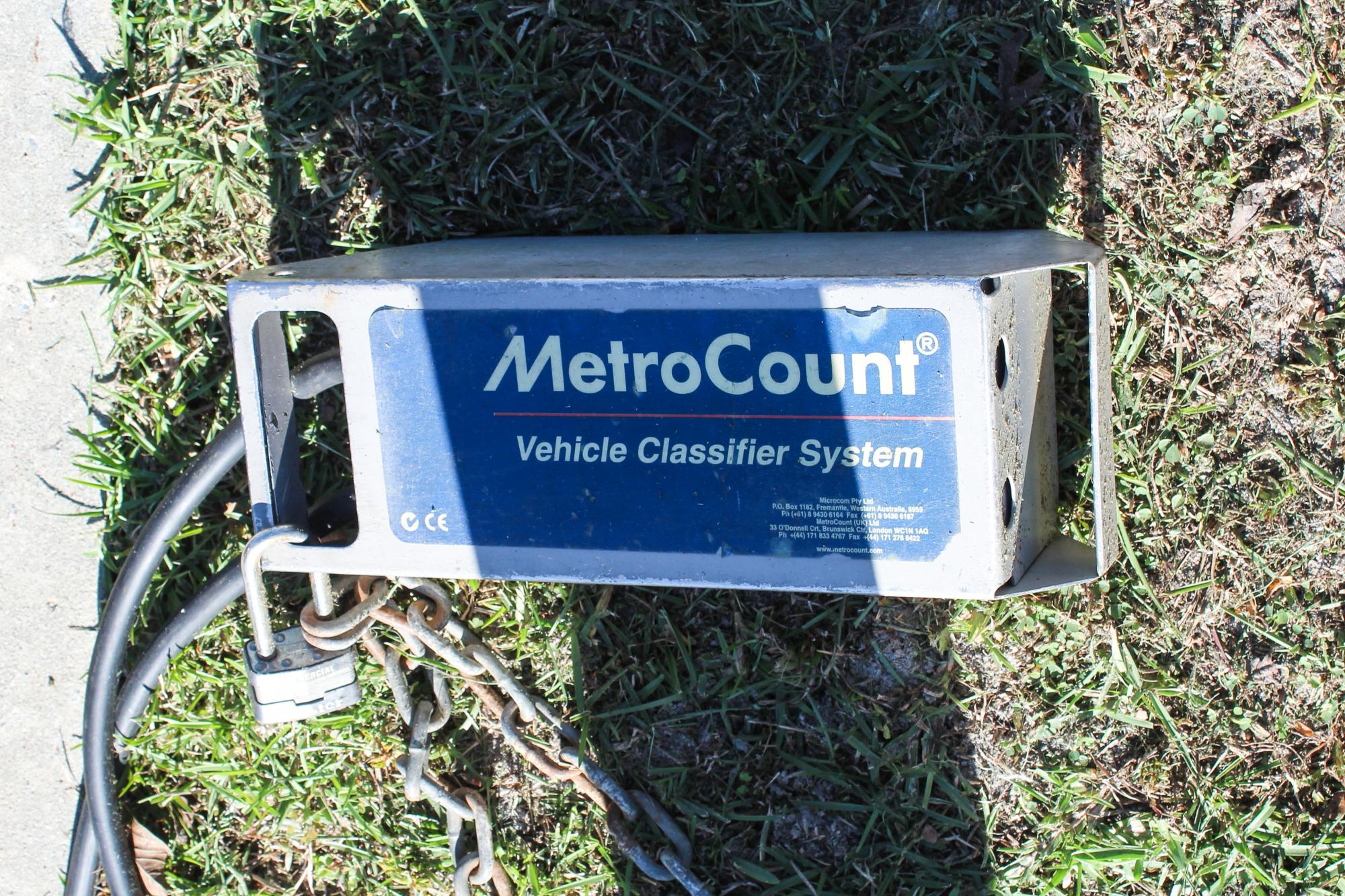 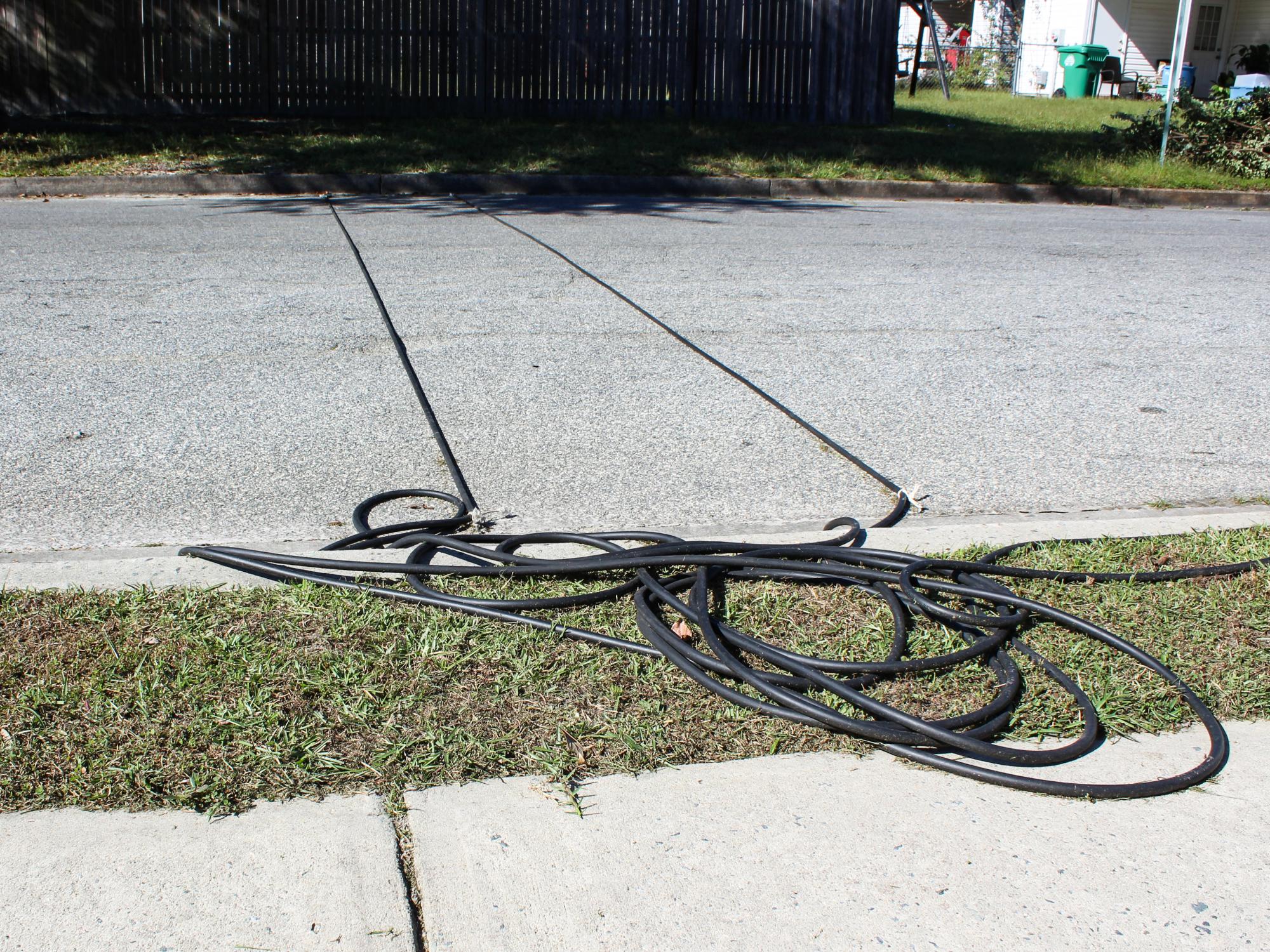 Once the study has been run for the desired time frame, the Traffic Division will pick up the equipment and review the Metro Counter program's information. The data collected is then compiled into a study and examined to see if it meets the criteria for the City policy. If it does not, the compiled study, along with a letter, will be sent back to the resident, letting them know that their area does not qualify for speed bumps. If there is in fact, a speeding problem, then the legal resident or homeowner can start the petition process and needs to collect the signatures of the other homeowners or legal residents in the area. From there, the signatures have to be verified. After that is done, the petition will go in front of the city council asking for speed bumps.  A big misconception is if you have 100 percent of the signatures of people who live on that block, you will get speed bumps, but that is not true. It then goes to the city engineer, and he decides if he wants to take that 85 percentile and move it down to a 70 percentile, that will give you a better chance of meeting the policy, and then you could get speed bumps. If you meet the 85 percentile, you have to get 70 percent of the homeowners or residents to sign the petition to move to the next step. So, there are a couple of different avenues to go through to get speed bumps in place.

Since the city rarely approves requests for speed bump installation, Traffic Manager Larry Ogden wants to let residents know that overall it does not appear many neighborhoods in Valdosta have a speeding problem. "We typically conduct around 175 to 200-speed studies a year. Of those studies, we may have three or four that may indicate a speeding problem on that roadway. Generally, most speed studies that come back do not warrant a speeding issue, and therefore no speed bump is necessary," said Ogden.

No speed studies that have been conducted this year have resulted in the installation of speed humps or bumps.