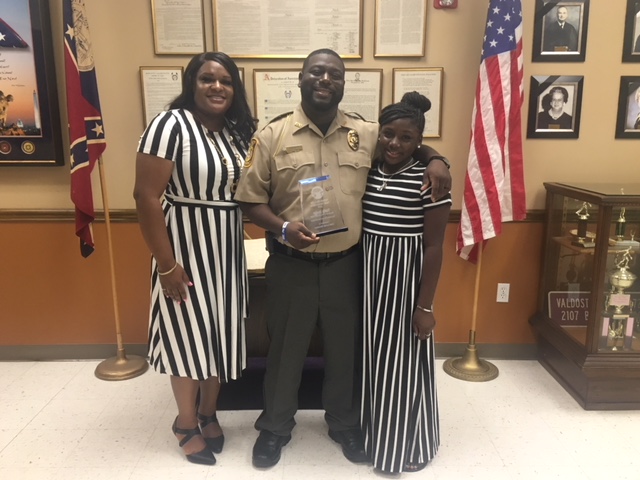 On Tuesday, September 1, 2020, The Valdosta Elks Lodge No.728 recognized Officer Travis Hodges as the Public Service Officer of the Year.

Officer Hodges has been with the Valdosta Police Department for 12 years, and his current assignment is a School Resource Officer at Horne Learning Center.  Officer Hodges was born and raised in Valdosta, and always knew that this was the community that he wanted to serve.

Officer Hodges was joined by his wife, Keitha Hodges, and daughter, Zoey Hodges, as well as Chief Leslie Manahan, to accept the award.

“Over the past couple of years, Officer Hodges has been working through a serious health crisis.  Instead of Officer Hodges letting this get him down, he continues to move forward.  Officers Hodges is a dedicated police officer who always comes to work with a smile on his face, and is always giving a handshake or a hug to members of his police family.  He is always positive and this shows in his work,” said Leslie Manahan, Valdosta Police Chief. “Officer Hodges is a positive role model for the students in his school, as well as all of the youth of Valdosta.  He treats everyone he encounters with dignity and respect.  Even when he has to take a law enforcement action with a citizen or a student, he does it in such a manner that the person knows he cares about them.”

Attendance to the award reception was limited therefore Officer Hodges co-workers showed their support by escorting him and his family to the Elks Lodge from their residence.