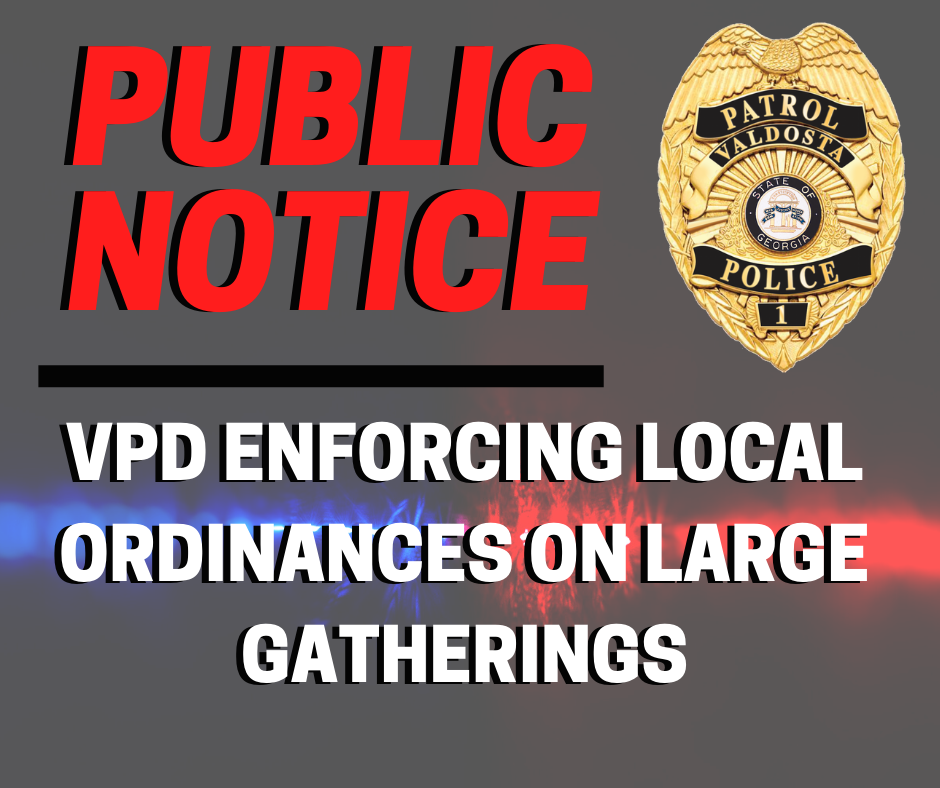 The Valdosta Police Department is enforcing rules on large gatherings that are causing disturbances and violate disorderly conduct laws. These types of large gatherings are prohibited under the executive order issued by Governor Kemp.

Of recent, VPD responded to more than 75 calls and complaints in two days. These calls referenced large gatherings, such as block parties or outdoor events, which blocked city streets, created disturbances and were in violation of the Governor’s Executive Order. Several arrests were made as a result of those calls.

Police are asking for compliance from all and will take enforcement action to prevent the spread of COVID-19.
Individuals found disregarding warnings from officers will be charged with a misdemeanor. Misdemeanors carry a maximum penalty of $1,000 fine and up to a year in jail.

Also, homeowners should know that any large gatherings which take place at their residence could result in the homeowner being charged with disorderly house.

“These gatherings are irresponsible and go against all efforts that are being put in place to stop the spread of COVID-19. If members of our community will not protect each other and continue to gather in public places creating disturbances in our community, we will be forced to take action as we did this past weekend,” said Police Chief Leslie Manahan. “While we are out enforcing these crowds we are putting our officers at an unjust risk of exposure. This reckless behavior is potentially endangering the entire community.”

Anyone who wants to report large gatherings within the City of Valdosta is asked to call the VPD Non-Emergency Number at 229-245-5270.