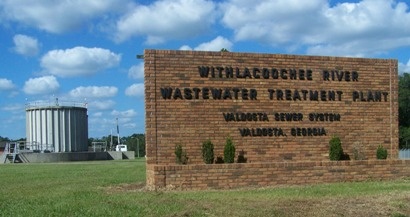 The City of Valdosta Utilities Department has been working diligently to complete several projects to address issues at its Withlacoochee Wastewater Treatment Plant (WWTP).

The city is working closely with its consultant and contractor who are on site at the WWTP implementing several projects that, once in place, will help keep the Withlacoochee Wastewater Treatment Plant in compliance with the NPDES permit until the relocation of the plant is complete. The city is currently preparing for the issuance of the RFP for the relocation of the WWTP, which is expected to cost approximately $20 million and be completed by November 2015.

Approximately $2.5 million in short-term solutions are currently underway at the WWTP and are expected to be completed in the next 2-8 months. These projects have been designed so that as much equipment as possible can be re-used in the new plant at the new location. These projects and associated equipment include:

Four additional projects are expected to be completed by November 2014 at a cost of $32 million and will remove over 50 percent of sewer flow from the Meadowbrook sewer trunk line. These projects include:

City officials are hopeful that the short-term projects will provide the relief needed to minimize and avoid any further permit violations until the relocation of the WWTP is accomplished. Although the Environmental Protection Division (EPD) requires the reporting of these permit violations, its terminology can be confusing to most citizens. For example, a permit violation at the treatment plant is classified as a "spill" according to EPD language, leading most to believe it is raw sewage. However, a spill, in the overwhelming majority of the incidences at the treatment plant, is a result of higher-than-usual volumes of storm water entering the sewer collection system. This combination of normal sewer flow and substantial storm water inflow during major rain events hydraulically overwhelms and short circuits some of the wastewater treatment process capabilities causing some solids to be washed from the final treatment processes. The city must report this as a spill according to permit regulations. However, the water this discharges into the local waterways is not raw sewage but a combination of mostly storm water and almost completely treated sewage.

One reason for this is that the city's WWTP treats five to eight million gallons of wastewater per day—2.1 billion gallons each year—to standards much higher than the quality existing in the river. During rain events, pollutants such as animal feces (attributed to wildlife, pets and livestock operations), chemicals, pesticides, herbicides, etc. are all washed into the river untreated from other properties and many other uses, which contribute to river pollution. As stated already, in the event of a permit violation, the water leaving the WWTP is not raw sewage, but rather a combination of large volumes of storm water and substantially treated wastewater some of which has not fully completed the final treatment process. As a result, these discharges typically do not have any measurable adverse affect on river quality, but still must be reported as a precaution in order to inform the public.
The Utilities Department's five-year system wide plan includes an evaluation of the entire sanitary sewer collection system. Approximately 75 miles of the city's 300 miles of lines have been evaluated and over 5,720 of the city's 6,473 manholes have been mapped and inspected. The evaluations and inspections will help staff prioritize and schedule major rehabilitation projects to ensure the efficiency of the city's sanitary sewer collection system.

The Valdosta Mayor and City Council will vote at the Aug. 22 council meeting to approve an intergovernmental agreement that specifies the terms of the upcoming SPLOST VII referendum. If the one-penny sales tax is approved by voters on Nov. 5, 2013, it is expected to generate about $150 million, of which the City of Valdosta will receive $80 million, or 53.35 percent. Nearly 70 percent, or $55.4 million, of the anticipated funding will be dedicated to wastewater projects to resolve the issues at the WWTP and in the collection system.

"This commitment of funds recognizes the high priority of relocating the wastewater treatment plant and moving the collection system to support it," said City Manager Larry Hanson. "The SPLOST VII funding source will give us an opportunity to correct these deficiencies and have a system that will serve this community for the next 30 years."